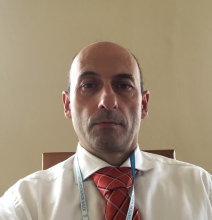 Stefano Bistarelli is Associate Professor of Computer Science at the Department of Mathematics and Informatics at the University of Perugia (Italy) since November 2008. Previously he was Associate Professor at the Department of Sciences at the University “G. d’Annunzio” in Chieti-Pescara since September 2005 and assistant professor in the same department since September 2002. He is also research associate of the Institute of Computer Science and Telematics (IIT) at the CNR (Italian National Research Council) in Pisa since 2002. He obtained his Ph.D. in Computer Science in 2001 that was awarded as the best Theoretical Computer Science and Artificial Intelligence Thesis (awarded respectively by the Italian Chapter of the European Association of Theoretical Computer Science (EATCS) and by the Italian Association for Artificial Intelligence (AI*IA)). In the same year he was also nominated by the IIT-CNR for the Cor Baayen European award and selected as the candidate for Italy for the award. He was PostDocs at University of Padua and at the IIT-CNR in Pisa and visiting researcher at the Chinese University of Hong Kong and at the UCC in Cork. Some collaborations, invited talks or visits involved also others research centres (INRIA, Paris; IC-Park, London; Department of Information Systems and Languages, Barcelona; ILLC, Amsterdam; Computer Science Institute LMU, Monaco; EPFL, Losanna; S.R.I, San Francisco). He has organized and served in the PC of several workshops in the constraints and security fields; he was also chair of the Constraint track at FLAIR and currently of the same track at the SAC ACM symposium. His research interests are related to (soft) constraint programming and solving. He also works on Computer Security and recently on QoS. On these topics he has published more then 100 articles, a book and edited a special issue of a journal on soft constraints. He is also in the editorial board of the electronic version of the Open AI Journal (Bentham Open).