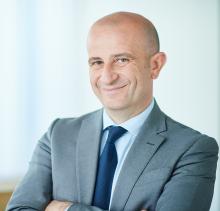 Mario Beccia holds a university degree in Economics&Management, an MBA in management of innovation, and several certifications in the cybersecurity and information technology domain (CISSP, CCSP, ITIL, TOGAF9).

He started his career in 1997 by joining a start-up company focused on the use of web technologies for businesses. He then worked as independent consultant on IT and Information Assurance projects in Italy and Belgium.

He joined NATO Allied Command Transformation in 2006, where he worked on business transformation and capability development programs. He supported the setup of the NCIRC (NATO Computer Incident Response Capability) program by collecting and engineering requirements, championing the creation of an implementation roadmap for Cyber Defence in NATO, working with various Cyber Defence entities in the organization (Cyber Defence Committee, C3Board, Emerging Security Challenges Division, NCIA, NATO Office of Security, etc…).

He served as technical director for Cyber Coalition (one of the largest Cyber Defence exercises n NATO), and led the Cyber Defence tracks of CWIX (an exercise to test and validate interoperability between NATO and NATO nations’ C2 systems).

He setup the Cyber Defence track of the TIDE Sprint (a think-tank with participants from industry, NATO nations and other international organizations), and the Cyber Defence portion of the FFCI (NATO’s Framework For Collaborative Interaction, aimed at enabling knowledge exchange between NATO and industry).

He moved on to the NATO C&I Agency in 2015, where he supported the creation of several Cyber Defence information exchange programs (including the NICP, NATO Industry Cyber Partnership). He led the NCIRC implementation program by setting up and running projects intended to expand and consolidate the capability, such as 10 Additional Sites, ANWI/New NATO HQ, BMD, IT Modernization Adaptations.

He recently joined EDA as Project Officer Cyber Defence, leading the Cyber Defence program of the Agency, in charge of several cross-domain and multinational projects under the PESCO framework and other multinational initiatives.

He is passionate about computer programming, crypto currencies and electric vehicles.