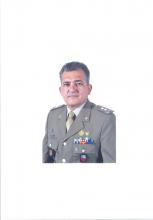 Major General Angelo PALMIERI is a Signal Officer who attended the Army Military Academy in Modena and the School of Applied Military Studies in Turin.

Upon the completion of his military and academic education, and during his whole career, MG Palmieri took command of several Signal Units of the Army, leading high-specialized assets also in different operations in Motherland and in Area of Operation abroad.

Throughout his career, Maj.Gen. Palmieri gained a deep professional experience and a great expertise, not only in his peculiar branch of military communications and in operational information, but also in the field of the Army modernization in a joint-combined context and NATO and EU environment. In the period he was the Chief of General Plan and Policy office in the Italian Army General Staff, he leaded also many projects to modernize and/or to implement new Army capabilities.

Promoted Brigadier General, he spent a year-course studying Chinese language and military studies at the People’s Republic China Army University and then he was assigned to the Italian Embassy in Beijing, as Defense attaché to China and, as secondary accreditation, to Mongolia. Back to motherland, he commanded the Army Signal Brigade and after, in the rank of Major General, the Army Signal and Information Command.

The very last important projects carried out by him are the review of Army C4I’s organization, the enhancement of cybersecurity of Defense’s ICT infrastructure together with the design of Joint Cyber Command.

He is currently the Head of the C4I Systems and Digital Transformation Division of the Italian Defense General Staff.