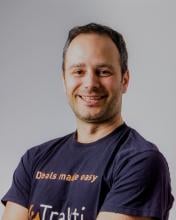 Luigi is the co-funder and CEO of TRAKTI, an award winning peer to peer contract negotiation and lifecycle management platform integrated in the blockchain, that is part of the Startupbootcamp family of start-ups. Luigi is an innovator, an entrepreneur and a mentor that invested the last seventeen years working on distributed systems, enterprise software, e-negotiations, Future Internet architectures and protocols. In 2006 he created the first peer to peer negotiation system for SMEs called “Open Negotiation Environment”, a research project funded by the European Union in FP6, that proved the possibility to run business negotiations in a peer to peer network before the blockchain. This research work led to the creation of eXrade, the company he founded in 2011 to commercialise ONE results. Luigi started his career as funding and R&D manager of CREATE-NET an international research center that he contributed to create in 2003 and that he successively led as Chief Operating Officer until the 2016 acquisition.