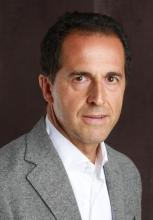 He began his career in 1991 as Head of ICT for Foreign Subsidiaries in a engineering multinational and from 1996 he became Corporate Industrial Controller for the International Division of the Company.

Starting in 1999, he coordinated the innovation and business development for digital appliances and services in a major household goods’ Italian-based multinational, working for two years in the United States as the CEO of a startup business in the home automation and safety sector.

He joined Finmeccanica in 2004, where he held the positions of Group CIO and Senior Vice President Group Purchasing and ICT in the Group’s Shared Services Company. In 2009 he moved to one of the Group’s OpCos where he assumed the role of VP Business Development and Marketing through several mergers’ phases, eventually working on the strategic process that led to the perimeter of the current Division.

He is member of the Board of Directors of Eurotech, Chairman of the European Organization for Security (EOS), Board member of Confindustria Digitale and President of its Cyber Security Steering Committee, Board member of Anitec-Assinform and Chair of the Smart City sector of SERIT.