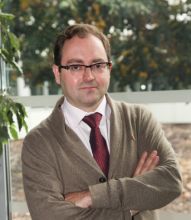 Dr. Felix A. Barrio is Head Manager of Talent, Industry and support to R&D&i of INCIBE, the Spanish National Cybersecurity Institute, since 2017. He holds a MSc in Software Engineering and a Doctoral degree from the University of Salamanca, and a postgraduate degree in Information Technologies Management from the University of Alcala. He was a Fulbright Fellow in 2013 and since 2014 he is Honorary Associate at Department of Mathematics in the University of Leon. He holds CISM (Certified Information Security Manager) and ISO 9001-14001 Lead Auditor credentials.

Since 2007, Felix Barrio’s professional work has been in the Ministry of Industry, and later in the Ministry of digital Agenda. He has held management positions in the areas of software engineering, research and development, innovation and cyber-security, among others in the Spanish National Communications Technologies Institute. This background has been rounded out by his active participation in academic and professional forums in the ICT world with a focus at the cyber-security sector. Since 2013 he is coordinator of the Spanish JTC 1/SC 27/WG 1 Information security management systems (AENOR-Spanish Association for Standardisation and Certification) leading the translation team that brought ISO 2700X:2013 standards family to the Spanish language.