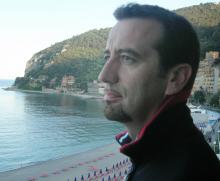 Fabio Ugoste is graduated with the top marks in Business Administration, with a specialization in “Finance and control” at the Turin University. He started working in 1986 as system engineer in Istituto Sanpaolo
(Turin) and became Head of the Unit “Design of Systems and Local networks” in Sanpaolo Imi in 1993; he stayed in Sanpaolo Imi since 2007 and then he became Head of the Service Management Office for the Retail Area in Intesa Sanpaolo. In 2009 he was given the role of Head of Partnership Architectures and Information Security Sub‐Department and in 2010 he became Head of Customer Relationship and ICT Controls Sub‐ Department in Intesa Sanpaolo Group Services. He was appointed Head of Cybersecurity and Business Continuity Management at Intesa Sanpaolo in 2017. In this role, he is also Information Security Officer for the Intesa Sanpaolo Group with the responsibility of defining and ensuring implementation of Group policies and guidelines on information security, business
continuity and fraud prevention according to corporate strategies and objectives, also ensuring direction, coordination and control to the other Group’s Companies and of overseeing the IT security and business continuity risks, also contributing to the operational and reputational risks management. He is deeply involved also at institutional level, being member of ABI‐LAB Governing Council and CERT‐FIN Committee, being one of the Intesa Sanpaolo Representatives in AFME (Association for Financial Market Europe) and also a member for the Italian CODISE Committee (at Bank of Italy).