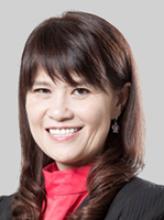 Since its inception in 1988, Eva Chen has spearheaded Trend Micro’s emergence as one of the    world’s most innovative Internet content security companies.

Before becoming CEO, Eva served as executive vice president from 1988-1996 and CTO from 1996-2004. Under her direction, Trend Micro has produced a chronology of industry firsts, from unique products to security management approaches. As a result of her innovative leadership, she was appointed CEO in late 2004.

Of her many accolades and accomplishments, a few of the most prominent: