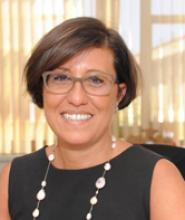 She worked at CONSOB in the Markets Division since 2000, where she has been manager in the areas of Cash and Derivatives Markets Office.

She is the Consob representative at IOSCO Committee 2 on Secondary Markets  since 2000.

She is the Consob representative at ESMA Secondary Markets Standing Committee and Chairman of ESMA Task Force on Pre-trade Transparency Waivers. She has been Chairman of various Task Force at ESMA level in the area of transparency of secondary markets and market microstructural issues.