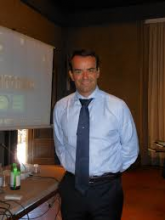 Currently appointed as Head of Communication Navigation Surveillance Meteo and ICT Security Organisational Unit, he's responsible for the implementation of ENAV Investment Plan related to CNS and operational ground comm network (ICT) infrastructure for ATM in Italy. The investment rate in such domains is about 40M€-50M€/year. In 2015 he launched the ENAV UTM initiative, which is now an investment project under his responsibilities.

With a degree in Aeronautical Engineering, after few years spent in the European Space Agency, he entered ENAV in 2002 at managerial level. In ENAV, he has been involved in most of the processes for the definition of the Company strategies and its policies for the business development and ATM services improvement, inter alia contributing to the preparation of the Company Strategic business plan, the yearly investment plans and the European convergence plans; advising the Top Management on important opportunities such as the ENAV involvement in the SESAR initiative from its very beginning (end of 2003) and securing its commitment.

Since 2004, he was responsible for ENAV participation in the SESAR Programme. The Definition phase successfully closed in 2008 with the delivery of the ATM Master Plan, celebrated in Rome. Then, after conducting the negotiation phase for ENAV accession to the SESAR Joint Undertaking, the Public-Private company that has been mandated by the European Commission to develop the ATM Master Plan, he coordinated the overall ENAV contribution and represented ENAV in the governance bodies of the SESAR JU.