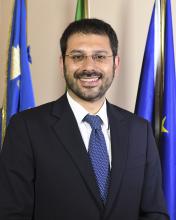 Born in Salerno on April 20, 1981, he got his high school diploma (specialization in core science) from Liceo Scientifico “Giovanni Da Procida” in 1999. In 2003 he graduated as a Civil Engineer. He then specialized in Geotechnics and Hydraulic Engineering from Salerno University. He is a member of the Board of Engineers of Salerno province and a registered consultant/expert witness for civil and criminal cases with the Court of Salerno. In 2016 he obtained a Master Degree in Intelligence and Security from Rome Link Campus University. A practiced civil engineer, he has also worked for 5 years in the sector of Strategic Works Design, in particular telecommunication, security and video surveillance systems and projects requiring high-level security clearance. Engineer Angelo Tofalo has also worked at the design of Tetra (TErrestrial Trunked Radio) Italia. He is the co-founder of Intelligence Collettiva, a project aimed at deepening and disseminating a comprehensive culture of security, a single platform based on contributions from scholars, technical experts, researchers, and intelligence professionals. In 2013, during the in the XVII Legislature, he was elected a Member of Parliament for the Campania 2 Constituency (XX Constituency), as leader of his list. On May 7, 2013 he was appointed a member of the Chamber of Deputies VIII Committee- Environment, Land and Public Works. Since June 5, 2013 he has been a member of COPASIR, the Parliamentary Committee for the Security of the Republic. On November 8, 2013 he became a member of the Chamber of Deputies IV Committee - Defence. He was again elected to the Chamber of Deputies in 2018 as leader of his list for the constituency of Salerno. On June 12, 2018 he was appointed Undersecretary of State for Defence in the government led by President of the Council of Ministers, the Honourable Giuseppe Conte. He speaks English. A lover of sports, he is a member of the Italian Parliament Football Team. In 2010, as a member of the football team of the Salerno Board of Engineers, he won a minor national championship